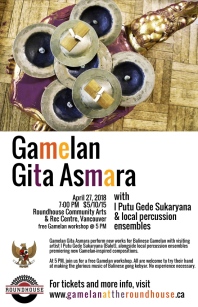 TRIPLE-BILL OF GAMELAN AT THE ROUNDHOUSE FESTIVAL

An initial impetus for this concert came from gamelan-aware pianist Rory Cowal, who approached us with the idea of honouring Lou Harrison’s 100th anniversary by performing his Concerto for Piano with Javanese Gamelan. We’ll play the exquisite and somewhat less traditional middle movement. Cowal will also be featured in the premiere of Michael O’Neill’s Mode of Attunement, a multi-sectional piece which utilizes Alligator Joy’s distinctive tuning to create a beautifully strange fusion of gamelan and piano sounds and contemporary new music structures. Sutrisno Hartana will premiere Baureksa, a semi-ritual piece featuring overlapping polyrhythmic vamps and the deep, resonant tones of the suling gambuh (bamboo bass flute); its aim is to strike a balance between the spiritual and the physical. Mark Parlett’s premiere, Palindromnia, delves into expansion/contraction of rhythmic cycles within a non-idiomatic sense of jazz harmony. (Note: Gamelan Alligator Joy is the chamber ensemble incarnation of the performing group Gamelan Madu Sari, playing instruments commissioned by composer and Western Front co-founder Martin Bartlett in 1990.)

Opening the concert, Michael O’Neill’s Beledrone project will play sections from his full-length work, which was premiered in 2016 in Music on Main’s Modulus Festival. Beledrone also has a kind of ritual quality – its Balinese component is based on funeral music – but the piece weaves together its multicultural materials, including text by Vancouver poet Gerry Gilbert, to achieve an unexpected synthesis of solemnity and piquancy. Vocal soloists are Beverly Dobrinsky and Alison Jenkins.

GAMELAN AT THE ROUNDHOUSE continues on April 27 when Balinese Gamelan Gita Asmara and Guests will hold forth. The Vancouver Community Gamelan Society acknowledges the support of the City of Vancouver, The Consul General of Indonesia in Vancouver, and The Western Front.